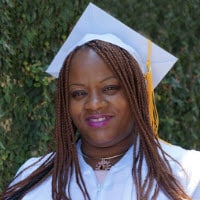 Interviewer: How was your experience at CDI?

Monisha: “My experience at CDI was really good. It was challenging. It was definitely an experience, and I’m glad I got through it.”

Interviewer: What was your favorite experience?

Monisha: “My favorite experience was probably clinical, going to the different facilities and getting to know the patients, and actually doing nursing care.”

Interviewer: Did you have a favorite facility?

Monisha: “My favorite facility was probably LA Community Hospital because we got to see a lot of the ICU patients. And even though we’ve been at the facilities and nursing homes and the hospitals, it was my first time seeing someone actually go home. Like I have seen people in the hospital and we kinda leave after six weeks and they are still there, but it was like it gave me this new feeling when I saw one of my patients who I took care for maybe three weeks, when they discharged him, it was like an unbelievable feeling to see him walk out the door.”

Interviewer: Kinda of a big payoff for you?

Interviewer: What was the toughest part of the LVN program?

Monisha: “Oh Gosh. A lot of the parts were tough. Probably the tests back to back, learning new terms that I never heard before. It’s like learning a new language, body parts, where they are, and stuff. Just yeah, a lot. All of it.”

Interviewer: So it was all pretty tough but you took the finals, you passed, how did that feel?

Monisha: “That felt like, I was in shock. “Seriously, I passed? I’m done?” I was in shock. It felt so good, everything paid off like all my sacrifice and hard work, and not cleaning my house and not cooking, it all paid off.”

Interviewer: Looking back, obviously, you passed. But going into it, did you feel like you’re prepared for it?

Monisha: “No. I had to get more mentally prepared, like probably the first week or two, I’m like,”Oh my gosh, what did I get myself into?” But then, I got more prepared and then I’m like, “Okay, I can do this.” So my confidence kind of raised after maybe the first month or so.”

Interviewer: And that made the ones coming up a little bit easier?

Interviewer: What brought you to nursing? Why didn’t you wanna be an LVN?

Monisha: “I don’t want to give you my whole life, my sob story, but I have a four-year-old who is my youngest and I had complications with him. I had my 20% chance to live, and I got better. Then when I got better, which took probably about six months to a year for my energy level to kind of come back. When I got better, I was just amazed with the human body, like how it repaired, I repaired, and I had great nurses. I mean, I don’t remember my doctors, but I remember my nurses. They were just like fantastic. They pushed me to get better, pushed me to walk, they were encouraging, and I’m like, “You know what, I’m kinda wanna do this.” So, here I am.”

Interviewer: That’s where you kind of saw your future?

Interviewer: Why did you pick CDI?

Monisha: “Because I was searching a lot of schools online because I’m not rich. So I had to make sure I’m picking a school that’s good, that’s you know, has a good pass rate, good reputation. So I saw like maybe three to four schools all over because I don’t care about driving or whatever. Three to four schools and this one I met with Janis and I met with I think Jennifer, and they were really nice and seemed like they really cared and they were really gonna help me. So that’s why I thought about it for about a week or so and then I decided to go to CDI.”

Monisha: Yeah, it did. I like that. It wasn’t a huge campus where there’s like a thousand students at a time, and everybody kinda know when to checks on you, know what’s going on with you and everyone tries to help you.

Interviewer: How did you like that as a student going through a tough program?

Monisha: “It was good because at times I thought like, “Am I stupid or something, I can’t do this,” but they encourage me. They’re like, “Just keep going.” You know Jennifer Sublime [SP] was in the program before so she had the same feelings and… But Ladonne was encouraging. They were just really encouraging and kept telling me, You can do this.”

Interviewer: So would you recommend this program now to friends and family?

Monisha: “Definitely. I tell everyone who’s interested, who I meet at the clinics we were at, who are like CNAs who are thinking about LVN school, I always tell them, “You don’t have to go off of what I’m saying. Look online or go up there and visit with them but it’s really a good school. Like I won’t recommend it if…I would tell you I signed the contract and it’s too late and I’m stuck here. But no, it’s a good school.” I really recommend it.”

Interviewer: What do you want to say to new students coming up?

Monisha: “That it’s gonna be challenging. But if you commit yourself and you really follow everything the instructors say, you can pass. You can definitely do it because I have four kids and a husband and I did it, so they can do it.”

Personal Information you submit through our Sites, such as your name, address and other contact information, may be collected by Career Development Institute for internal marketing and development purposes as well as to respond to your inquiry, complete a transaction for you, or fulfill other forms of customer service. You can choose not to receive marketing from us by “unsubscribing” using the instructions in any marketing email you receive from us.