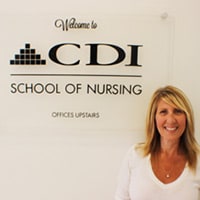 Why did you choose Career Development Institute, Inc. (CDI)?

“I had been working in the medical field for more than 20 years while putting my sons through college. Once they finished their education, it was time to turn the attention back on me and do what I wanted to do. That was nursing.

A year before I enrolled at CDI, I had planned on going to West Coast University. Midway through the admissions process, they changed the schedule on me, and it no longer made sense for my schedule. I found CDI online after some research, and their schedule worked for me.”

What was your favorite aspect of the VN Program?

“I liked all aspects really. I’m an avid reader, so I enjoyed the reports and studying. I also liked the clinical, hands-on experience, so it’s difficult to name just one thing. We had a small class, so I quickly made friends with one of my classmates. We studied together and prepared for the NCLEX-PN together. It was all good.”

How did you feel once you passed the NCLEX-PN?

“Before the exam, I took a weekend NCLEX-PN review class with Jennifer (classmate), which was for both LVNs and RNs. We quickly realized we knew as much as the RNs.

Once it came time to take the test, we researched the different centers and made a weekend out of it. We prepared for the long version of the test, preparing for 5-6 hours of testing. When my test clicked off at 87 questions, I thought I had failed. My heart dropped. Jennifer’s test had stopped early, too.

For four days, Jennifer and I tried to reregister to take the test. Our former instructors kept assuring us that we had passed. As it turns out, the NCLEX-PN will stop you early if you are doing well during the test. We received our approval letter shortly after.”

What was the most difficult part of the program?

“Retraining my brain to learn. I’m intelligent and a quick learner, but I had to retrain myself to open up and absorb all this new information. Every day we learn new things, but to refocus and retrain yourself, it’s a hard thing.”

What would you tell prospective students interested in the VN Program?

Throughout the program, you are constantly getting bits of information. If you’re not open to taking it all in and learning, you won’t get it. Keep your head open. With the clinical sites, you have to just dive in because you never know who you’re going to meet. It’s all what you make out of it.”

What would you tell current students in the VN Program?

“Only you can determine what you get out of this program. You have to be committed. My husband and I spoke before I enrolled. We agreed that while I’m in school, there will be no other life. The program was my priority.

This program is an investment into your future. If you are working hard, doors will open. Doors will open for the right person…make sure you’re that person.”