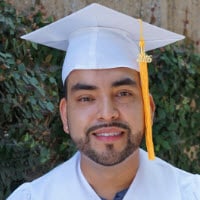 Interviewer: So tell us about your experiences at CDI.

Diego: “Well, my experience at CDI has been beautiful. Since day one it felt like it was a family-owned business, I felt like I was at home all the time. Knowing Jennifer on a hand to hand basis, I know from Janice, Jennifer, LaDonne, everybody treated me so good. I never felt like I was just a student, I was more than a student, I was like family. It was great being there, my experience was exceptional and I couldn’t have done better being at a different school.”

Diego: “My favorite experience at CDI was everything. I think I had a great time there, it was hard times too but I think CDI, everything was good about it, from studying, from taking tests, from being with the students. I just felt really at home. Everything was perfect there, from the bottom of my heart it was like a family there.”

Interviewer: What would you say is the toughest part of the LVN program?

Diego: “I think the toughest part for me was working two jobs and going to school but other than that everything was okay for me. It was just working two jobs and then going to school full-time for a minute was the hardest because I was always tired, sleepy. But other than that I think everything was fine, I think waking up early was the hardest for me but as far as an LVN, it’s a hard program but you can manage, definitely.”

Interviewer: How did it feel taking the finals when you finally passed?

Interviewer: Did you feel like you were prepared for it when you took the finals?

Diego: “Yeah, I was prepared because they prepared us very well at the school and then I did my part at home. I studied really well too and I was prepared for most of the test, I wanted to just go get it over with. So I was always prepared for the test. There were times that I wasn’t but I learned from my mistakes and I kept on going.”

Interviewer: Why did you want to become an LVN in the first place?

Diego: “Because I already work at a hospital for over eight years and I’ve seen nurses and doctors and I really liked that feel over all these years and I felt like it was meant for me to be working at a hospital. After that I told myself, “You’ve got to start from somewhere,” so I decided to become an LVN and eventually I want an RN later but I wanted to take it step by step.”

Interviewer: What was it about CDI that made you choose the school? Did you check around to other schools, what brought you here?

Diego: “I did check around to other schools, actually one of my sister’s friends recommended me for this school because it was full-time and it was 13 months. When I came here the interview with Janice, she was really nice and she showed me a tour of the school and I really liked it, I felt at home. I had already checked different schools and I didn’t really feel it but when I saw the school I liked it a lot. Even though it was far from my home, I told myself, “I can come here every day for a year.” I could be here every single day and not only that, the package course were really good here. You could tell all the teachers here, they’re amazing, they’re really smart and knowledgeable and they know their stuff really well. I’ve been to different schools and college and it doesn’t matter if you’re in college or a private school or LVN school, whatever. I think LaDonne and all the instructors here are really great.”

Interviewer: The pass rate here is so strong and so hard, did that make the whole process a little easier, less stressful? Did the end goal make it a little easier for you?

Diego: “Actually, yes. Being in a tough program like this, getting ready for the big test at the end, the big exit exams, made it so much easier because they prepare you for the worst. For this whole year, in the school with tough professors and homework and tests, makes you a better person or a better test taker at the end. Right now, it’s a breeze, everything. As far as exams, clinicals, all of that. Thanks to the teachers and everybody that helped me out, right now it’s so much easier for me to understand.”

Interviewer: Would you recommend the LVN program to your friends or family?

Diego: “Oh yeah, definitely. I already did, I already recommended a few people and they’re already seeing me on Facebook or Instagram and I told them, “I’ve been there, I know how it is.” I can recommend it, I would recommend it to everybody.”

Interviewer: What do you want to say to new students coming into the program?

Diego: “If you have any doubts at the beginning, don’t worry about it. Once you start the program you’ll see that it’s worth it because the management is really well managed from top to bottom. Everybody makes you want to be part of this school. You’re not just a number or trying to bring money to the school but everybody treats you like you’re family and if you want to come to this school, by all means, enroll. At first, I didn’t want to come because it’s far from where I live but when I saw how they teach and how they have their structure going on, it’s perfect, I like it. So yeah, I would definitely recommend it to my own family.”

Interviewer: Anything else you want to say?

Interviewer: Thank you, thanks for coming to speak with us.