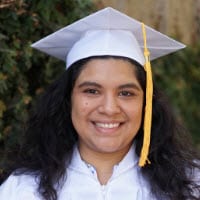 Interviewer: Just tells us how was your experience at CDI?

Fabiola: “Well, my experience was fun. It was the moment I came into do, you know, the walk through to the school with Janis, it was…they were all friendly, they were really like, you know, helpful with all the information. Tina, with the financial aid, she was really good with that. And once school started, it was, you know, the orientation and such, everybody was introducing themselves and it made it feel more personal being there. Like, really like family helping you through the school. And all of my female classmates, they made it easier on me, so I really loved the experience at CDI.”

Fabiola: “Yeah, it did, especially since we all started helping out each other. I know our instructors told us sometimes, you know, nurses try to, like, stop other nurses or try and prevent them from continuing on, but we all help each other. We were all really helpful. We all would, you know, first term, we made a pot luck. One of our classmates, she was pregnant, so we threw her a baby shower. So it was really, you know, family oriented…”

Interviewer: Good. What was your favorite experience at CDI?

Fabiola: “My favorite experience at CDI was the clinicals. Going to each…the nursing homes and the hospitals, as well as Totally Kids up in…I forgot the place…Sun valley. It was a good experience. I didn’t think it was going to be really involved that way. I thought it was going to be, like, going and shadowing the nurses, and not able to do anything because that’s what I’ve heard from other schools that they do sometimes. But over here, it’s really interactive, so I really liked it and the clinical instructors were all very nice.”

Interviewer: How did you like working with the kids?

Fabiola: “Working with the kids? It was good. They had like, you know, us pausing a bit, not doing much with the kids because, you know, children you don’t want to exacerbate their condition and such, but it was really fun, you know, seeing them and seeing…learning the kind of conditions that children sometimes experience, because you don’t really see it in children as often as you do as in a facility like that. But you do hear it in adults mostly because you always know all the adults business more than the children’s. So it was good working with them.”

Interviewer: What would you say was your toughest part of the LVN program?

Fabiola: “My toughest part of the LVN program was probably actually sitting down to read the ATI books. Those were…those were the ones where I struggled the most with them. So, but in the end, they really did help, especially for the exit exams.”

Interviewer: How did it feel when you completed those exit exams?

Fabiola: “Every time I saw level two with each exit that I did, I was so happy and I felt accomplished. I’m like, “Okay, I did it on the first try.” So that’s what made me really happy and, I guess, continued on with each exit, doing my best so that I could continue getting those level twos, or the percentage that was required to pass. So I wouldn’t have to repeat the exam.”

Interviewer: Did you feel like you were prepared for those exams?

Fabiola: “I felt that some of them I were prepared, because I really liked the subject, like mental health, or the fundamentals in med surg. But a few others, like maternity and, pharmacology, I didn’t feel so prepared. But I had to keep on studying those, so that’s where I focused most of my studying on.”

Interviewer: And when you got level two there, did that make the rest of them a little bit easier?

Fabiola: “It did make everything else and I know passing those that I didn’t feel comfortable with, I’ll pass the comprehensive. So that’s what matters to me.”

Interviewer: And why did you want to be an LVN in the first place?

Fabiola: “Originally, my plan was to become a doctor. But then I started thinking that I actually liked being more involved with the patient. So I decided to go to nursing, and I went and found CDI because my father actually saw the school when he was passing by there. And that’s how I went and went in there, and how they talked about nursing and all the instructors, it made me want to pursue nursing even more. So that’s why I attended there. And for me, LVN isn’t my only…where I’m going to stop at. I want to go into RN and then, hopefully, nurse practitioner. But that’s…nursing at least is a step in…”

Interviewer: Are there other nurses in your family?

Fabiola: “Actually, I have cousins who live on the East Coast who are also doing LVN. One of them, she’s already an LVN and she’s already doing her RN school. So we have that support going on, so…”

Interviewer: Right. That’s good, that’s good. Why did you end up picking CDI? Did you look around at other schools?

Fabiola: “I did look at other schools. The other one that I saw, because everybody talked about it, was American Career College. And I went and saw it, and I really didn’t like it. It didn’t feel like they were welcoming you. It looked like you were just another paycheck for them. So that’s what I didn’t like about them. And CDI, on the other hand, even though we had to pay, but they were more, you know, they told us where our money was going to go and what we were going to get out of it. So, that’s what mattered to me.”

Interviewer: And do you feel now, on this side of the program, that you got all of that and more?

Fabiola: “I feel I did, and more, yeah. And, you know, more friends, we got instructors that will help us even after we’re gone, so that’s what I really like.”

Interviewer: Having gone through it all the way now, or just about all the way, would you recommend the LVN program to your friends or family?

Fabiola: “I would actually. I have recommended one of my friends and she is going to start looking into it. I think she wants to join in August once it starts. But I know from, you know, clinical sites that we’ve gone to, other, like, CNA nurses, they’ve asked us about the school and if we would recommend it and so now we have, you know, some of those CNAs now coming to become LVNs. So, it’s really good.”

Interviewer: Well you’re a pro now, you’re a veteran. What would you say to new students coming into the LVN program?

Fabiola: “To new students coming into the LVN program, I say: study, but don’t study the book just directly. Try and figure out, like, these little keywords that’ll make you like, connect everything together. Because that’s really what matters because you’re not…it’s a thick book, our textbook. We’re not going to memorize everything in 13 months. Like, I can say probably even what I learned the first term, I probably won’t remember much of it, unless I, like, skim back through. But it’s just, going with your gut instinct of what’s right over what’s wrong and always making sure that the patient is safe. That’s really what really matters and that’s where you should focus when you’re learning everything in the books. So that’s what they should do.”